Cataract, in general terms are a clouding of the lens of the eye which leads to decrease or disturbance of vision. Cataracts, as much as they may differ from case to case, can affect either of the two eyes or both the eyes. Cases of cataract are not usually developed or reported in a short span of time. It takes time for a cataract to develop in most of the cases. The potential symptoms of cataract are trouble seeing bright lights, blurred vision, faded colours, halos around light and trouble with vision at night.

These symptoms and the problem of cataract, on the whole will lead the person to having difficulty in reading and driving. In certain cases, it might also go to the extent where the patient will have the problem of recognizing faces of people. Poor or reduced vision caused by cataract constitutes to half of the blindness and 33%* of visual impairment worldwide. (Stats from www.wikipedia.com).

The most common reason for cataracts is because of aging and cases are usually diagnosed on people over 40 years of age. It may also occur due to trauma or radiation exposure, be it from birth or from eye surgery for other problems. In cases of cataract, clumps of protein or yellow-brown pigment may get deposited in the lens, eventually reducing the amount of light transmitting to the retina at the back of the eye. Factors that pose a risk to the problem of cataract are alcohol, diabetes, smoking tobacco and prolonged exposure to sunlight.

It occurs at the back of the lens. People suffering from diabetes or those influenced by high doses of steroid medications have a greater risk of developing a Posterior Subcapsular Cataract.

It forms deep in the middle area of the lens. This type of cataract is usually associated with aging.

It is characterised by white, wedge-like opacities which begin in the periphery of the lens and search their way to the centre in a spoke-like fashion. Cortical cataract usually occurs in the lens cortex which is the part of the lens that surrounds the centre of the nucleus.

Symptoms and Signs of Cataract

Cataract always starts out small and doesn’t make much difference to your vision until it grows to a certain extent, thus making you take time to understand that you have a problem. Since cataracts take time and are very slow in this process, it is often observed that you might ignore the condition in the initial stages. As the condition intensifies, you might notice that your vision has got blurred, like looking through a cloud.

Cataracts make you uncomfortable while looking at the sunlight or the light from a lamp. This condition makes the light of the sun or the lamp seems too bright or glaring. Or you might also notice that the headlights of the oncoming vehicles seem brighter than before while driving. It is also possible that the lights might not look as bright as it did.

Other symptoms/signs are as follows:

Age is synonymous with the word ‘cataract’. Most common cause of cataract is aging. Proteins in the lens denature and degrade as you get old, and this process is accelerated by diseases like diabetes and hypertension which act as catalysts. Environmental factors like toxins, ultraviolet light and radiation have cumulative effects, which are intensified by the loss of protective and restorative mechanisms due to aging.

Trauma causes thickening, swelling and whitening of the lens fibres. The white colour may remain while the swelling usually heals with time. In blunt trauma, or in cases of injury which penetrates the eye, the capsule in which the lens sits might get damaged. This kind of damage to the eye increases the chances of allowing the fluid from other parts of the eye to enter the lens which eventually leads to swelling and later, whitening. This situation obstructs light from reaching the retina.

Ultraviolet light has been observed to cause cataracts, and there are consider evidence that indicates wearing sunglasses at an early age might slow its development later in life. Microwave radiation has been found and proven to cause cataracts. Cataracts, after experiments have been linked to the ionizing radiation such as X-rays in consideration of the damage done to the DNA of the lens cells. In addition to that, electric and heat injuries denature and whiten the lens. This happens as a result of direct protein coagulation.

Genetics is another strong factor to be considered while discussing cataracts. The presence of cataracts at an early age or childhood can definitely be due to a certain syndrome.  Deletion syndrome, Down syndrome, Patau’s syndrome, Trisomy 18 syndrome and Turner’s syndrome are typical examples of chromosome abnormalities.

The human skin and the lens of the eye share the same embryological origin and so it can be affected by similar threats and diseases. People with atopic dermatitis and eczema tend to develop shield ulcer cataracts occasionally. Ichthyosis is autosomal recessive disorder which is associated with nuclear sclerosis and cuneiform cataracts. Basal-cell nevus and pemphihus have similar associations.

There has been and still existing a controversy that prevention of cataracts, while a series of studies has suggested that higher intake of certain nutrients and nutritional supplements may reduce the chances/risks of cataracts.  A 10-year study conducted by female health professionals has found higher dietary intakes of Vitamin E and the carotenoids lutein and zeaxanthin from food and supplements were associated with decreased risks of cataract.

Good food sources of Vitamin E include spinach, sunflower seeds and almonds. Also, sufficient intake of lutein and zeaxanthin includes kale, spinach and other green vegetables. Other studies have shown that antioxidant vitamins like Vitamin C and foods containing omega-3 fatty acids might decrease the risk of cataract.

In the initial stages, when you begin to notice the symptoms, you will be able to correct or improve your vision by using strong bifocals, magnification, new glasses, appropriate lighting or other visual aids. Surgery is an option which has to be considered only when the condition has progressed enough to seriously impair your vision and affect your daily life.

People tend to consider cataract poor vision as an inevitable fact of aging, but cataracts surgeries are a simple and relatively painless process to correct or regain proper vision. It is said that nine out of ten people who undergo cataract surgeries regain very good vision, somewhere between 20/20 and 20/40. The surgeon removes your clouded lens during surgery and in most of the cases, replaces it with a clear, plastic intraocular lens (IOL).

New IOLs are being developed using latest technology and years of research to make the surgery less complicated for the surgeons. Presbyopia-correcting IOLs potentially helps you to see not only one, but all distances.  To know more about Cataract treatment and FAQs you can go visit this page on Cataract. 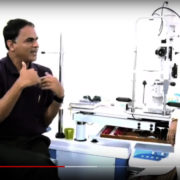 Have you heard of Prelex ? - An Informal Chat with the Doctors 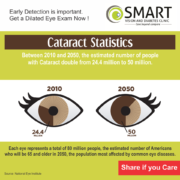 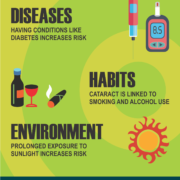 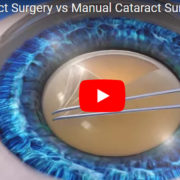 Want to join the discussion?
Feel free to contribute!

How to get the Best Cataract treatment in Chennai?